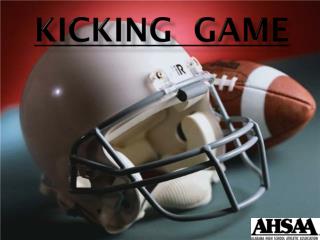 KICKING GAME. FORCE. Responsibility for forcing the ball from the field of play across a goal line is attributed to the player who carries, snaps, passes, fumbles or kicks the ball, unless a new force is applied to a grounded backward pass, kick or fumble.

Kicking - . projecting an object by striking it with the foot must have the perceptual abilities and coordination to make

The Kicking Game - . why is it so important?. rwc stats - semi finals &amp; finals you have to get there to score the

The football kicking tee - . the football equipment that football teams use today to help the special team that use these

KICKING GAME - . key rules for the kicking game. types of kicks categories of kicks opportunity to catch a kick illegal

Health Kicks From Kimchi - . by sarah falah. what is kimchi?. kimchi includes a wide variety of fermented vegetables. the

Sepak Takraw - . jay eley and justin sandoval. what is it?. mix between soccer, tennis, volleyball, and gymnastics

KICKING AND PUNTING - . by danielle martin. power is transferred to and through the ball. plant non-kicking foot next to

Kicking - Ryan logan-magnusson. kicking. what is a kick?. using one’s foot to strike an object with enough force to