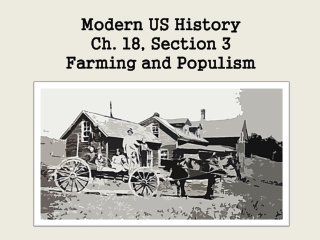 Modern US History Ch. 18, Section 3 Farming and Populism. New Lives on the Plains. Homestead Act – 1862 US law that gave 160 acres of govt. owned land to people who would move to the land and farm it for 5 years Modern US History Ch. 18, Section 2 Wars for the West - . settlers encounter the plains indians. as settlers moved into

Farming and Populism - . explain how the u.s. government encouraged western settlement. passed the homestead act that

Modern US History Ch.26, Section 4 “War in the Pacific” - . japanese advances after pearl harbor. in the first 6

Section 18-3 - Section 18.3 hydrogen ions and ph. explain ph and poh . relate ph and poh to the ion product constant for

Ch. 3 Section 2 - . where and when?!. coordinate systems. tells you where the zero point of the variable is located and

Ch. 4, Section 3 - . elasticity of demand. elastic demand: when a given change in p causes a relatively larger change in