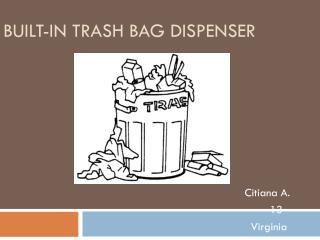 Bag Dispenser - Hey dog owners! use a bag dispenser for pet waste management. we, at petwasteco encourage dog owners to

Trash your Trash! - . caroline chelton. what is trash?. trash is waste that is left behind that cannot be used for

TRASH - . pop quiz. where do the dumpsite boys live?. stuppa behala smokey mountain jun-jun. what is the name of the

Trash - . students will make predictions about the novel using examples from the novel. prediction. an educated guess

TRASH - . the t rue story by joberts 5 th graders. did you know?. if we put all of the solid waste collected in the u.s.

Trash In Our Oceans - . by grant noble. why is this happening?. every day, thousands of sea animals die from pollution or

Trash in our Oceans - . by: ally, quiana , maria, julie &amp; brittany. the problem. plastic and trash is discarded

Built in Furniture - . built-in furniture offers many advantages over freestanding furniture: they are generally less