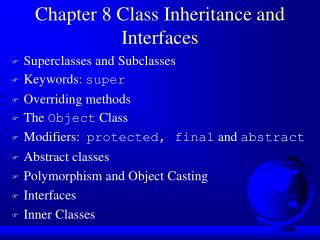 Abstract Classes &amp; Interfaces - . definitions abstract methods = methods that are declared, with no

Chapter 8: Dynamic Binding And Abstract classes - . objectives. what is static binding? what is dynamic binding?

Abstract Class - There are some situations in which it is useful to define base classes that are never instantiated. such

Chapter 8 Objects and Classes - . objectives. to understand objects and classes and use classes to model objects. to

Object-Oriented Programing in Java - . cheng-chia chen. contents. object and class the contents of an object/class