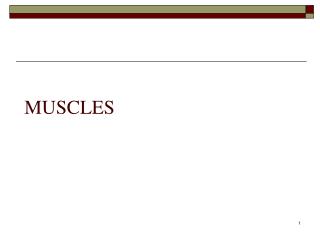 Muscles - . what they’re made of and how they work. muscle types. there are over 350 muscles in out bodies. there are

Muscles - . crma #4. what are the muscles and what do they do

Muscles - . function, actions and identification of major superficial muscles, some conditions and treatments. types of

Muscles - . every movement of your body depends on muscles. there are three different types of muscles: involuntary

Muscles - . 13.8 muscles are effectors which enable movement to be carried out. muscle. is responsible for almost all the

Muscles - . muscles work by contracting. muscles pull. a pair is needed to move a bone two ways. an antagonistic pair. a

Muscles - . important!. a muscle that is primarily responsible for producing a movement is called a prime mover or an

Muscles - . ummmmm. do you think that people can have more muscles than others?. no! every human being has 600 muscles in

MUSCLES - . the human body. did anyone see the jets play on sunday?. does anyone go to dance classes or karate?. did