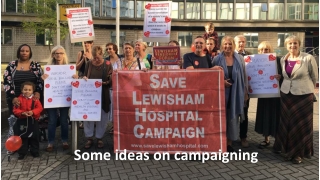 Some ideas on water - . is it urban or ..? water quality and quantity ground and surface water hazards (pre and post

Campaigning - . definition: to exert oneself continuously, vigorously, or obtrusively to gain an end. campaigning basics.

CAMPAIGNING - . 2 campaign periods: primary campaign and campaigning for the general election. the campaign game. the

Some Project Ideas - . literature review of particular subjects – what is new since “applied hydrology” was

Some Project Ideas… - . 1. biometric sensor board (two-lead ekg system) for mica. deescription: design and fabricate a

CAMPAIGNING - . what to look forward to in the next two terms…. term 1. equal access campaign refugee/action week. trip

Some Ideas on the DAMPE Software Framework - . xin wu university of geneva. software framework. a sw framework is just a

Some ideas on innovations in implementation science - . michel wensing, phd habil. how to … measure success of

Some Brief Assessment Ideas - . before we start: let’s face it… i grade a lot of papers! i think it is really all

Some ideas for IBTrACS - . adam sobel, columbia university (based on much work &amp; discussion with suzana camargo,