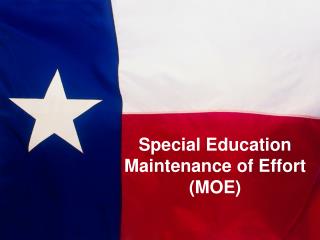 Special Education Maintenance of Effort (MOE). Objectives. Participants will learn: What is MOE? What are the parts of MOE? How is MOE calculated? What might count as exceptions? What do we do if we get a letter from TEA? How do we avoid the problem?. Definitions and Reports. Special Education Needs in our school - . what does the special education needs register look like in our school? . what

MAINTENANCE OF EFFORT - . federal cross-cutting special education. what is maintenance of effort?. a presumption that

Special Education - . moving from compliance to results. turn to a partner. what are the first words you think of when