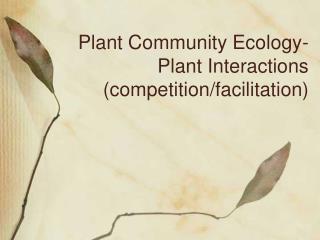 Plant Community Ecology-Plant Interactions (competition/facilitation). Competition. Reduction in fitness (how an organism apportions resources among competing demographic functions (survival, growth, reproduction) due to shared use of a resource that is in limited supply Intraspecific