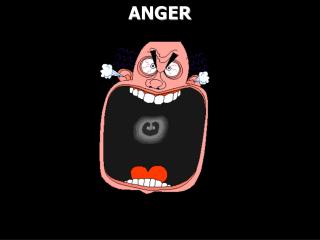 ANGER. Psalm 119:127 Therefore I love Your commandments More than gold, yes, than fine gold! 128 Therefore all Your precepts concerning all things I consider to be right; I hate every false way. Anger - The fire of shaytan . by: issa beck. anger. what is anger?. anger is described as a over powering emotion that is

Anger - T 4. anger. passing through the red storm. introduction. i . anger: a problem as old as cain and abel. ii. what

Anger - . by: shelbey frase and ilana kovach. description of emotion. a strong feeling of displeasure, annoyance, and

Anger - . management. what is anger?. anger is an emotion. it is a signal that we think we are being treated

Anger - . i wondered what anger was up to when he left so swiftly. suddenly soldiers broke through our windows and i

Anger - . stop and count to 10. think about your choices. tell the person in words why you are angry. walk away for now.

Anger - . anger need not be a negative expression.anger is a normal human emotion that, when handled appropriately and

Anger - . lesson objectives: to understand what anger is and why we might be angry to explore the idea that we have a

Anger - . do i get angry sometimes?. why? in what situations? . how do i usually react? what do i do when i’m angry?.