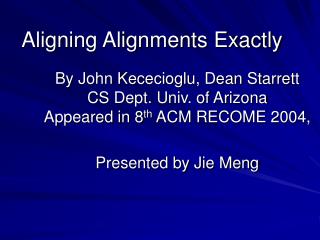 Alignments - . why do alignments?. detecting selection. evolution of drug resistance in hiv. selection on amino acid

Aligning - . the forerunner state. for kingdom covenant purpose. …the kingdoms of the world are our lord’s and his

Sequence Alignments - . dna replication. prior to cell division, all the genetic instructions must be “copied” so