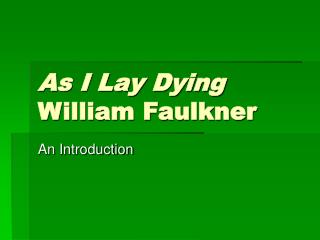 As I Lay Dying William Faulkner As I Lay Dying William Faulkner. An Introduction. Faulkner’s Unusual Format. As a leader of the Modernist Movement , Faulkner’s primary accomplishment is his use of experimental narration .

As I Lay Dying William Faulkner