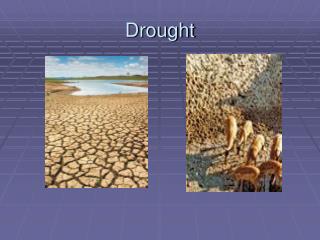 Drought. What is Drought. Drought is a normal, recurrent feature of climate Originates from precipitation deficiency over extended period of time, usually a season or more Considered relative to some long-term average Droughts - . what is a drought?. a drought is an unusually long time where there is not enough water to meet the needs of

DROUGHT - . what are droughts and what are their effects on the african people? . what is a drought? . a drought occurs

Droughts - . by addison hyde jack farbarik reid joseph addison tilley makiyah porter. what is a drought?. a drought is a

A Drought Relief Program for Maharashtra - . the affected region (expanding as we speak). effects of drought at various