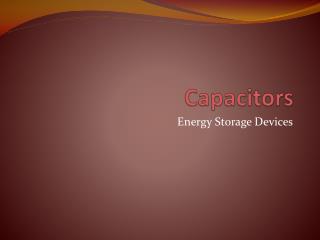 Capacitors. Energy Storage Devices. Objective of Lecture. Describe the construction of a capacitor and how charge is stored. Introduce several types of capacitors Discuss the electrical properties of a capacitor The relationship between charge, voltage, and capacitance Capacitors - . two large parallel sheets of charge are separated by a distance d , small compared to the size of the

Capacitors - . separating charge and storing energy. in this section we will learn: what makes up a capacitor how it

Capacitors - . capacitance is the ability of a component to store energy in the form of an electrostatic charge. a

Capacitors - . q v. v. charge is forced on to primary plate by voltage. charge is repelled off of secondary plate

Capacitors - . first… how does a battery work?. a chemical reaction formed in a “cell”. slow but constant

Capacitors - . a basic capacitor has two parallel plates separated by an insulating material a capacitor stores an

CAPACITORS - . february, 2008. capacitors part i. a simple capacitor. remove the battery charge remains on the plates.

CAPACITORS - . a device that has the capacity to store electric charge  energy a temporary battery nothing more than

CAPACITORS - . september 29, 2008. how did you do?. great ok poor really bad i absolutely flunked!. calendar of the day.

Capacitors - Store charge . they have two metal plates where charge is stored, separated by an insulating dielectric .