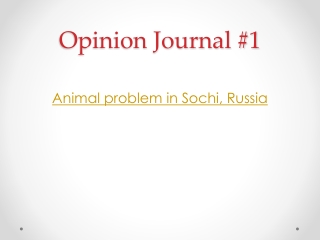 Public Opinion - . pols 21: the american political system. “one should respect public opinion insofar as is necessary

Public Opinion - . what is public opinion?. overt expression of values , beliefs , and attitudes by some segment of

Opinion Polling - . the who and how. who does polling?. news organizations like cnn, fox news, abc, and nbc. polling

Opinion journalism - . a few thoughts on independence versus partisanship. from the youtube debate. outcry from