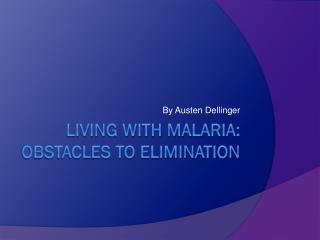 Living with Malaria: Obstacles to Elimination Living with Malaria: Obstacles to Elimination

Obstacles on the road to malaria elimination - How can we make sure drug resistance does not take us backwards Dr. Sylv

What measures of malaria do we need to monitor elimination

Obstacles to Global Development - . why have some developing nations made progress towards modernization and others fail

Innovative medicines for the control and elimination of malaria - . defeating malaria together. timothy n.c wells, scd

Getting to Zero: An Overview of the Southern Africa Malaria Elimination Support Team - . rwanda malaria forum 26

Obstacles to Development - . reasons why things do not get better. government. the decisions governments make

Obstacles to the Dance - . look what god can do… or look what i can do ?. “are you so foolish? after beginning with

Social Obstacles to Change - . the intersection of epidemiology, neurobiology, and clinical practice with veterans