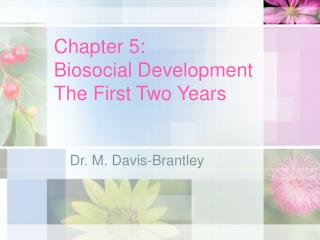 Chapter 5: Biosocial Development The First Two Years. Dr. M. Davis-Brantley. Body Size. Infants double their birth weight by the 4 th month and triple it by the end of the 1 st year Fat is typically acquired to provide storage for nourishment NPQ presents… Making the Most of Your 990 Return: A Red Flag Guide for Nonprofits - . with chuck mclean, senior

Social &amp; Personality Development in the Preschool Years - . chapter 8 development across the lifespan. self

Biosocial Development - . newborn to two-years. brain development. “use it or lose it” babies are born with 100

Chapter 23 – Late Adulthood: Biosocial Development Prejudice and Predictions - . ageism a prejudice in which people are