What is a kenning? - PowerPoint PPT Presentation 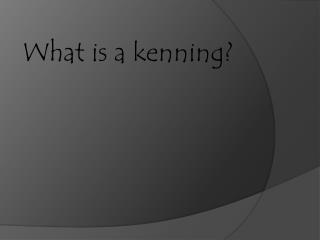 What is a kenning? What is a kenning?. Definition:. A kenning a literary device in which a noun is renamed in a creative way using a compound word or union of two separate words to combine ideas. Characteristics of a kenning: . Originated in Anglo-Saxon Old English and Old Norse poetry

What is a kenning?

Figurative language - . language that communi-cates meaning beyond the literal meanings of the words. poetic devices

Figurative language - . language that communi-cates meaning beyond the literal meanings of the words. poetic devices

KENNINGS - . what is a kenning? a kenning is a compressed metaphor or description using two nouns to describe a subject,

Kennings - . history of the english language 100508030 kelly huang. definition. a descriptive phrase in place of the

Boast Assistance to the Rescue - . kennings, personification, and allusions. kenning:. an anglo-saxon device this is a

Anglo-Saxon Riddles &amp; Literary Devices: - . alliteration and kenning. what is a kenning?. a kenning is a two word

Getting the most from the HEA - . jenny kenning, hea partnership manager. what is the hea?. the national body for

LO: To learn what a kenning is and write examples of our own. - Poem writing, brain hurting, thought provoking. kennings.

KENNINGS - . what am i?. night flyer, eater of mice, silent swooper , head twister, taloned taker. an owl. an owl!. what

Kennings - . history of the english language 100508030 kelly huang. definition. a descriptive phrase in place of the

Beowulf Terms - . epic. “an epic is a long narrative poem that celebrates a hero’s deeds. the earliest epic tales

Bellringer : Kennings - . kennings are miniature riddles. they are descriptive words or phrases that take the place of a

Beowulf - . beowulf is the first great work of national literature. like most heroic literature, beowulf is oral art.

Having Fun with Poetry - . exploring different types of poetry, their structure and the rules they follow. we’re going