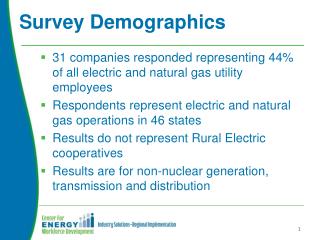 Demographics: Gender - . first contact with the seventh-day adventist church. 30% raised as an adventist 28% through a

OHIO MAA 2011 CALCULUS SURVEY - . part 1 development and demographics. bill fuller. history of the survey. the idea of a

To Survey or not to Survey? That’s a Really good Question! - It is tempting, if the only tool you have is a hammer, to

SURVEY RESEARCH - . uses questionnaires and interviews to ask people to provide information about themselves. examples:

Risk, Resilience, and Behavioral Health in the Ohio National Guard, 2008-2012 - . i. demographics: the who. ong sample