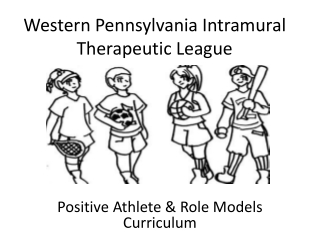 Western Pennsylvania Intramural Therapeutic League. Positive Athlete & Role Models Curriculum. Mission Statement. The focus of the league is not about winning and losing, but rather to promote participation and to teach our student athletes fair play and teamwork. Positive Meaning. Intramural Theory - . definitions. intramurals - the phase of a schools physical education program that is geared to the

Intramural Singles Tennis - A. in tennis, play is started with the serve, make by tossing ball into the air, hitting ...

Intramural Ultimate Frisbee - . coordinator: tiffanie mciver. when and where. sunday: 1:00pm 1:45pm all of the games will

Intramural &amp; Extramural - . units of participation. breaking the program into smaller units to provide the