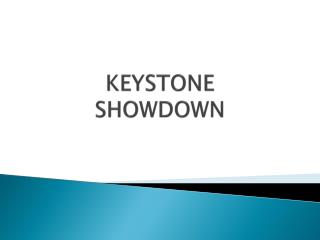 KEYSTONE SHOWDOWN. Question 1 . A gallon of paint covers 350-400 square feet, and Chelsea is planning to paint a room with 1440 square feet of wall space. How many gallon cans of paint should Chelsea buy?. Question 2. Billy is 6 years younger than Amy. The sum of their ages is 22.

CHAPTER 4 Biodiversity and Evolution - . core case study: why should we protect sharks?. 400 known species 6 deaths per

BIOLOGY KEYSTONE REVIEW - . use this powerpoint presentation to complete your viewing guide handout per topic. at the end

Biology Keystone - . review days may 2 nd and may 16 th module a: cells and cell processes module b: continuity and unity

Keystone Biology term Review - . mrs. geisler 6-5-14. a term that describes a nonliving factor in an ecosystem.

Lecture Outlines Chapter 4 Environment: The Science behind the Stories 4th Edition Withgott/Brennan - . this lecture will