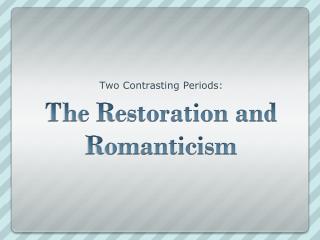 The Restoration and Romanticism

The Restoration and Romanticism

Neoclassicism - . &quot; the neo-classic period &quot; of english literature spans the 140 years or so after the

Romanticism, Realism, &amp; Impressionism in Art - . romanticism. characterized by the 5 “i”s imagination was

The Romantic Period (1798-1832) - . the quest for truth and beauty- “the divine arts of imagination: imagination, the

The Age of Romanticism - . “we have all of us one human heart.” –william wordsworth. in a nutshell:. rejected

The Romantic and Goth Period 1785-1830 - . created by bianca lopez. what exemplifies your literary period. the romantic

The Restoration and the Eighteenth Century Introduction to the Literary Period - . feature menu. interactive time line