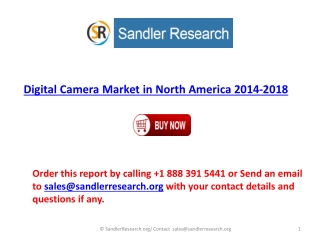 A digital camera or a digicam is an optical device used to encode images and videos into digital format. Unlike traditional film cameras that record an image on a film (analog), digital cameras record images as digital data. Digital cameras can be classified into built-in lens cameras, such as point-and-shoot cameras, and interchangeable lens cameras, such as DSLRs and MILCs. A DSLR camera works on a unique reflex design scheme, which combines optics with the mechanism of an SLR camera having a digital imaging sensor. North America Chromatography Systems Market by 2018 - The increasing number of research activities, coupled with the

Digital 2018 North Korea (January 2018) - Everything you need to know about mobile, internet, social media, and

North America Power Rental Market - The north american power rental market is estimated at $1.9 billion in 2014, and is