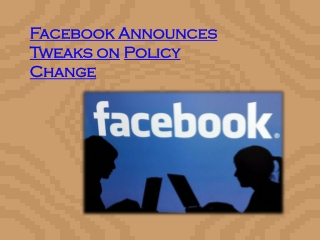 Facebook has announced another round of updates to previous drafts of its terms of service named Statements of Rights and Responsibilities in an attempt to ease concerns on information sharing and privacy.

FB Retargeting Guide - How To Do Facebook Retargeting - You may ask this: 1 how does facebook retargeting work 2 how much

Facebook and You: - . what students at diversity college need to know. what is facebook?. according to facebook.com: