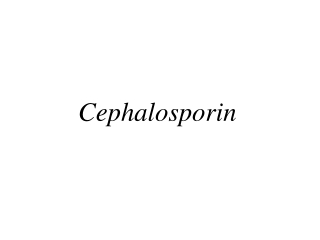 Cephalosporin. What is an Antibiotics?. A substance produced by or a semisynthetic substance derived from a microorganisms and able to inhibit or kill another organisms. What is Cephalosporin?. Semi-Synthetic Antibiotic

Comprehensive Analysis of Cephalosporin Market by 2023 - A cephalosporin is a group of semisynthetic, broad-spectrum

Antibiotics - . slackers facts by mike ori. disclaimer. the information represents my understanding only so errors and

Antibiotics – Part 1: Chapter 38 - . what is an antibiotic?. a medication that kills bacteria or slows their growth are