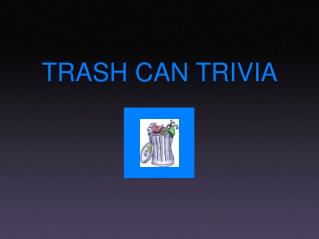 TRASH CAN TRIVIA. This person was the king of England . King George III King James King Henry VIII. King George 111. 5. This is was the last battle of the Revolution. Saratoga Appomattox Yorktown. Yorktown. 9. This branch makes the laws. Executive Legislative Judicial. Legislative.

Scavenger Hunt - . click on the pictures on each slide to find the answers to some exciting missouri trivia!. #1. name a

SLURM for Yorktown Bluegene/Q - . slurm on wat2q. goals setup a scheduler for the yorktown bluegene system to increase

TRASH CAN TRIVIA - . this state was originally an independent rebublic. georgia oregon texas. texas. 5. this document

Is Mount Everest in Danger of Becoming a Mountain of Garbage? - . by melissa smith. guiding questions:. 1. where is mount

Ms. Christensen’s Rules - . follow directions. a. be silent while the teacher is talking. b. listen. c. complete all

The Outsiders Review Game - . allison/ ezuka. rules of trashketball. each table consists of a team. a new person will

Monroe Doctrine - . main points. announced in 1823 when there were 4 nations interested in the oregon territory american