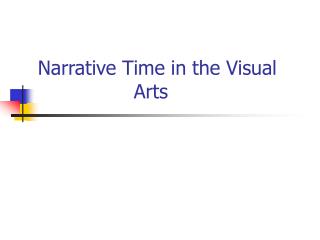 Narrative Time in the Visual Arts

Narrative Time in the Visual Arts. Let’s reiterate :. A narrative is an organization of the events in a story. Let’s repeat:. Time in any narrative medium may be expressed: Through sequencing of events (we assume that an event which follows is caused by the previous event)

Narrative Time in the Visual Arts

Modeling Rich Narrative Content - A confab intensive workshop on narrative modeling (aka, how to avoid the horrors of raw

Artist Entrepreneurial Workshop - Feb 27, 2007 - . artist grants and services: what do we do? what are you missing?. this

SCULPTURE - . introduction to humanities the humanities through the arts by f. david martin and lee a. jacobus. sculpture

The Narrative Paragraph - . narration is a piece of writing that tells a story of an event or experience. it’s usually

The Narrative Paragraph and The Narrative Essay - . what specific types of narrative reports have you written in other

The Visual System: From Eye to Cortex - . ch. 6. outline. the eye the retina visual transduction by rhodopsin from retina

Fine Art at UEL - . fine art is housed in the ava building on the uel docklands campus. the school of architecture and

Design Class Diagrams - . http://flic.kr/p/ar9z8f. what are you going to learn about today?. how to go from domain models