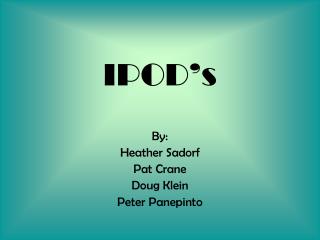 iPod Touch - . what is an ipod?. an ipod is a device that holds, photos, music, apps and loads more! we will be using the

An Evaluation of PPP in terms of The iPod Index: A Possible Replacement of the Big Mac Index? - Ernest e. (rick) walker.

When was the iPod invented? - . the ipod was invented in the mid 2000. this invention was a turning point in the

Apple - By matt stritzinger. apple. introduction. apple is an american multinational corporation that designs and sells

Apple-Merging Technology, Business, and Entertainment - . by : andrew porting cis 429 spring 2009. what might have

The Sound and Fury of iPods at Duke - . “… it is a tale told by an idiot, full of sound and fury, signifying

iPod Nano - By: casey marks and andy smida hypothesis to present to the audience the exciting new features offered with