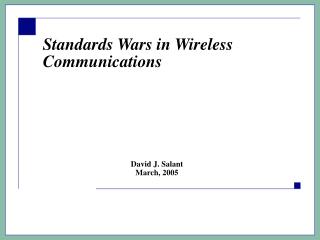 Standards Wars in Wireless Communications. David J. Salant March, 2005. Introduction. Mobile wireless communications industry has been locked in a series of standards battles for approximately 20 years. Currently, there are over 1.3 billion people using cellular and PCS service in the world.

Introduction to JavaScript - . from the infotech internet/intranet series. presented by dr. billy lim developed by dr.