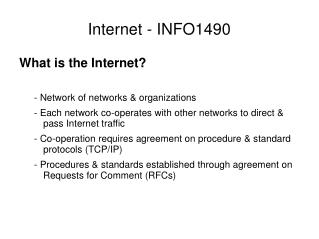 Internet - INFO1490 What is the Internet? - Network of networks & organizations - Each network co-operates with other networks to direct & pass Internet traffic - Co-operation requires agreement on procedure & standard protocols (TCP/IP)

The Internet and World Wide Web - The internet next what are some services found on the internet ? p. 68-69 fig. 2-1