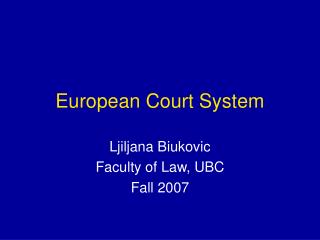 EUROPEAN COURT OF AUDITORS - . julia linares. background. the european court of auditors was established by the treaty

The Court System - . the us federal court system. the current supreme court. the court has final authority on cases

The Court System - . when a crime has been recorded and a suspect apprehended and booked  it creates a criminal case

The Court System - . overview, part 1. court jurisdiction. the power of a court to hear a case in question. three types