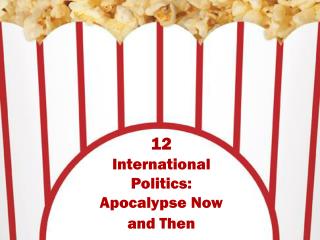 12 International Politics: Apocalypse Now and Then

12 International Politics: Apocalypse Now and Then Causes of War Given fictional depictions of war, one might reasonably assume that war is so horrible that only an accident or misunderstanding could would start one.

12 International Politics: Apocalypse Now and Then

Basic Phrases P13-14. 1.assume assume the cost 承担费用 I assume that he was there. 假定

“Neuronal Apocalypse” - N. “neuronal apocalypse”. “the brain of man being torn apart by the environment it has

Don't Assume - Don't assume that the fastest one on the quad racing track is a boy. a lot of people think that boys are

Northern Renaissance - . the renaissance spreads. focus. 1. define northern renaissance. 2. how did the italian

Alexander and the Terrible, Horrible, No good, Very Bad day - . let’s see what we know!. what was the first terrible

Horrible Harry - . there once was a midget dragon named bill. bill was almost frightened of everything. he was also