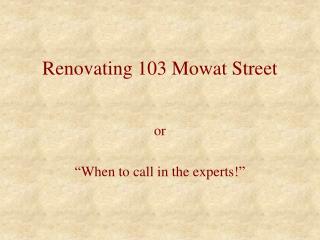 Renovating 103 Mowat Street. or “When to call in the experts!”. The proud owners. The (nosey) neighbours are in no doubt about my origins!. This was what sold us on the house … the hardwood floors, pocket doors and fireplace. NOT the wallpaper!. The kitchen was renovated for us. SOME FIREPLACE DECOR STYLES TO SERIOUSLY CONSIDER - You may not be aware of it, but your fireplace is central to your

Harley Street Hypnotherapist and Hypnotherapy - Looking for hypnosis treatment in london? jas bassi is a qualified

Cute Widesreen HD Wallpaper - Check out cute hd wallpapers, with love images best hd ... if you wish you can freely

The House on Mango Street - . important information. themes - universal ideas explored in a literary work. the power of

Owls in the family Book By: Farley Mowat - . ppt by: brandon #21. chapter1. there were two boys named billy and burse and

Street Pastors - . thank you for listening! normally that’s what we do!. our volunteers offer…. questions for you….

Renovating your House - . vocabulary. . have an extension: build on to the existing house to provide more rooms convert

Anime Street - . by: mia grays. logo. our logo requires different streets of all different types of anime that has been

Conventions of Gothic Literature - . horace walpole to supernatural. the

Reading Street - . unit 3 week 1. what is changing in our world?. how do we change as we grow?. what do we learn as we