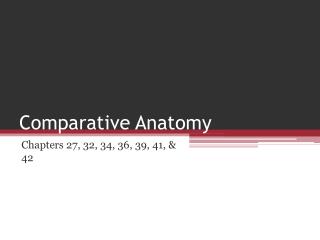 Comparative Anatomy. Chapters 27, 32, 34, 36, 39, 41, & 42. What IS an animal?. All animals are: Members of Kingdom Animalia Multicellular Heterotrophs Organisms that move about during part or all of their life cycles Most animals are invertebrates. Variation in Animal Body Plans. 15. Comparative Anatomy - . essential question: how does the evidence of geology, fossils, and comparative anatomy

Comparative Anatomy I Jeopardy! - . this is the evolutionary history of a species or a group of species. this type of