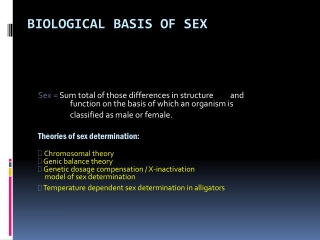 Chapter 11: Biological Membranes and Transport - Lipid aggregates. lipids are not ?free"virtually insoluble in

The Biologic Foundations of Psychiatric Nursing - . chapter 8. biological basis of behavior. most human behaviors have a

The Biological Basis of Behavior - . neurons: the messengers. neurons vary in size and shape all are specialized to

Biological Basis of behavior - . presented by: clinical psychologist sadaf sajjad. what we are going to learn?. how

The Biological Basis of Behavior - . chapter 2 . neurons: the messengers . section 1. what “language” do neurons

Discuss the genetic basis of Friedreich’s ataxia. What is the biological function of frataxin? - . ana terron

Basis Sets - . ryan p. a. bettens department of chemistry national university of singapore. we’ll look at…. what are