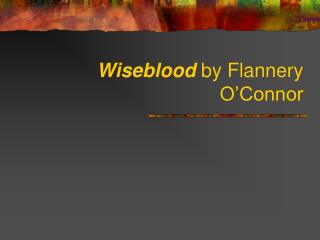 Wiseblood by Flannery O’Connor. Overview. Genre: Comedy Irony Hyperbole=>Grotesque Symbol Theme Allusion. Comedy. “All comic novels that are any good must be about matters of life and death” Two visions of integrity: author’s and popular culture’s Bellringer January 30, 2014 - . why do you think living along a river would be vital in an ancient civilization? grab a