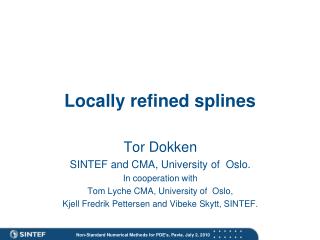 Splines - . by: marina uchenik. history and dilemma. early designers of ship hulls or air crafts were faced with the

Keyframing and Splines - . jehee lee seoul national university. what is motion ?. motion is a time-varying transformation

Leadership Refined - . servanthood lesson five. every individual has a place to fill in the world, and is important, in

Contending Locally - . 2010 spring retreat. introduction. examples of people contending for the faith that were