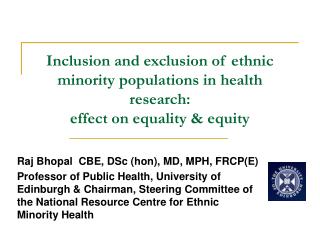 Projections of the Ethnic Minority Populations of Britain - Demographic effects of international migration on the uk.

Chapter I Concepts of Addiction in Ethnic Minority Populations - . substance abuse is a significant problem for all

7.6 Applications of Inclusion-Exclusion - . an alternative form of inclusion-exclusion example 1: how many solutions does

OFMDFM MINORITY ETHNIC DEVELOPMENT FUND - . briefing february 2013. what does the medf aim to do?. increase equality of

Background on the Office of Minority Health - The role of health it in measuring and reducing disparities garth n.