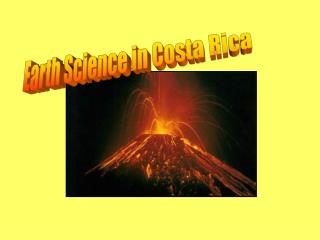 Earth Science in Costa Rica. Would you ever do this?. I I did!!!. Costa Rica Background. Chapter 1 An Introduction to Geology - . the science of geology. geology - the science that pursues an understanding of

The Nature of Science - . the methods of science. what is science? 1 . a method for studying the natural world 2 . from

Chapter 12: Earth Science - . a theory proposed by alfred wegener in the early 20 th century. the drifting of continents

Costa Rica’s multilateral vision of Sustainable Development and Climate Change - . lecture at the fletcher school of