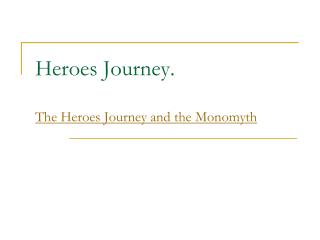 Heroes Journey . The Heroes Journey and the Monomyth. (1) Call to Adventure. The hero is “invited” by a power or event to join the world of the fantastic, often the hero does not know about the troubles that they are called to help with. Ex: Heracles. (2) Refusal of the Call. The Hero’s Journey - . what is a hero?. character who is brave selfless – risk taker demigod – offspring of a god

Independence and its Heroes - . independence…remained by far the most important moment for the new nations that

Our Heroes, Ourselves - . introduction to the psychology, cultural significance and literary t radition of heroes and

Greek Mythology The Greek Heroes - . heroism . what is your definition of a “hero”? what do our modern day heroes

The monomyth - . lecture 2/2. the belly of the whale. the separation of the hero’s world and the ego represents an

The Hero’s Journey - . the monomyth stage two: the initiation. the hero’s

Heroes - . what is a hero?. heroic: a : exhibiting or marked by courage and daring b : supremely noble or

You’re the IT Heroes - . john craddock johncra@xtseminars.co.uk. when all fails. the heroes. who do we blame?.

The Journey of a Hero - . a n exploration in fiction. there are many types of heroes. the journey. departure: the hero is

Intro to the Epic : The Hero’s Journey - . epics must have an epic hero . how do we identify that hero? archetype -

The Monomyth – The Hero’s Journey - . i. why do we need heroes?. role models . we want to strive to be like someone

Literary Archetypes - . lord of the rings film. situational/storyline. quest/journey. the call to adventure crossing the

The Challenges of the Hero’s Journey - . based on joseph campbell’s concept of the monomyth. the journey begins. the

“FICTIONAL HEROES NEVER DIE!” - . “ real heroes are only human. they lived and die like the rest of us. but