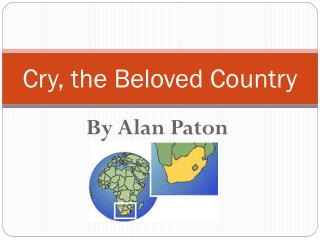 Cry, the Beloved Country. By Alan Paton. List at least two possible themes from your text. Provide three examples from the story to support how each of these themes is developed. Fear causes impulsive actions.

Cry, the Beloved Country Journal #8 - . what is the role of christianity—a european religion embraced by most of the

beloved - . something or someone who is dearly loved. glanced. to look at something very quickly. gleamed. shone or

Cry, the Beloved Country - . alan paton 1903-1988. pre-writing. pre-write anything that you know about south africa. we

Beloved - . theme notes. primal love. morrison plays with the line between what is “human” and what is “animal”