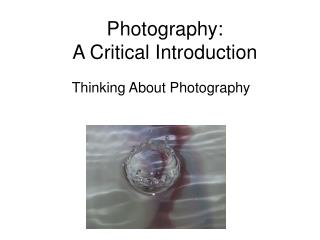 Photography: A Critical Introduction. Thinking About Photography. What is this lecture about? Debates and key writings on photography. Changing ideas about photography. Some history considered alongside art history, theory, and cultural history. Divided into four sections: “Is Photography Art?” - . “is photography art?”. we must 1 st gain a clear definition for 3 important questions!