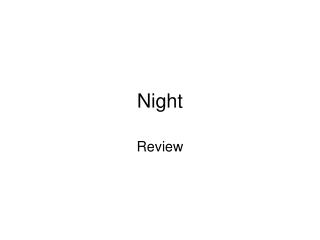 Night. Review. Page 3. Moishe Beadle – caretaker of the synagogue No surname – no true identity, recognition as a man “ jack of all trades ” (master of none): he knew a lot about many things, but no true religious education, uneducated- Eliezer goes to him for education

Rio at night - The lights of the brazilian olympic host