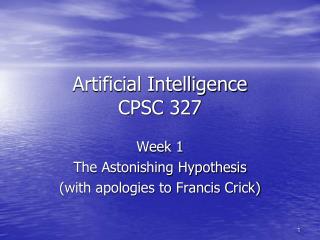 Artificial Intelligence CPSC 327. Week 1 The Astonishing Hypothesis (with apologies to Francis Crick). Towards a Definition. The name of the field is composed of two words: Artificial Art Artifact Artifice Article Intelligence. What do these have in common?.