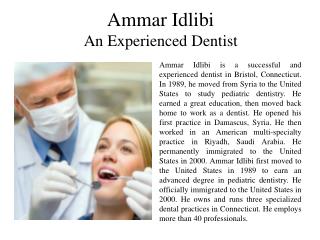 Ammar Idlibi is a successful and experienced dentist in Bristol, Connecticut. In 1989, he moved from Syria to the United States to study pediatric dentistry. He earned a great education, then moved back home to work as a dentist. He opened his first practice in Damascus, Syria. He then worked in an American multi-specialty practice in Riyadh, Saudi Arabia. He permanently immigrated to the United States in 2000. Dr. Ammar Idlibi - An Entrepreneur - Dr. ammar idlibi has been working as a pediatric dentist for over 20 years, making

Tips And Tricks To Find an Experienced Dentist

Are you looking for an experienced Family Dentist? - Dr. bruce m rogers is a preventive and family dentist in yorba

Significance of Having Experienced Family Dentist

Experienced Dentist in Pembroke Pines Area - Http://jacarandasmiles.com - looking for a pediatric dentist in florida? our

Meet Experienced Dentist at Northalsted Dental Spa - At northalsted dental spa, we are always here for you no matter what

Choosing An Experienced Orthodontist - Looking for invisalign around me? we provide the best invisalign payment plan

Hire an experienced agency - Worried about maintaining the public relations and marketing aspect of a product. just hire