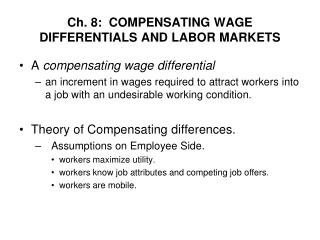 Ch. 8: COMPENSATING WAGE DIFFERENTIALS AND LABOR MARKETS. A compensating wage differential an increment in wages required to attract workers into a job with an undesirable working condition. Theory of Compensating differences. Assumptions on Employee Side. workers maximize utility.