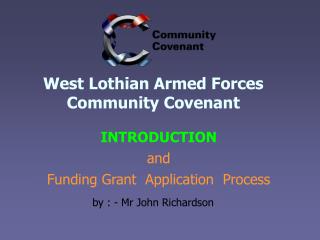 British Armed Forces Badges of Rank ( including those unique to cadet forces) - . badges of rank of the royal navy,

Lesson 13: The Baptismal Covenant - . “lesson 13: the baptismal covenant,” primary 3: choose the right b,

Covenant of Mayors Municipality of Genova - . ing. mario merello genoa, 19th may 2011. cruie. where is genova?. data for

the Canadian Military - . introduction:. canadian armed forces are the unified armed forces of canada, as constituted

YHVH OUR - . the covenant o n mount sinai and the ancient near east form. the historical and biblical look into the

Was the Weimar Republic Doomed from its beginnings? - . the second reich. hereditary kaiser (emperor) appoint/dismiss