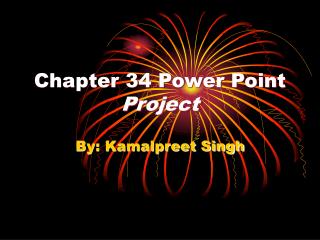 Chapter 34 Power Point Project. By: Kamalpreet Singh. Words to Know for Chapter 34. Gross domestic Product - the total value of all goods and services produced by a nation. Commune - included several villages, thousands of acres of land and up to 25,000 people. Ch. 34 Power Point - . nation-building in east asia and the pacific rim. the pacific

Power Point Final Project - . for my final project i have decided to provide some information on one of my favorite

Chapter 21 power point - . stars,galaxies, and the universe. constellation. a pattern of stars in the sky. visible light.

Civil War Power Point Project - . the most fun you will have all year!. essential questions to answer. how did the war