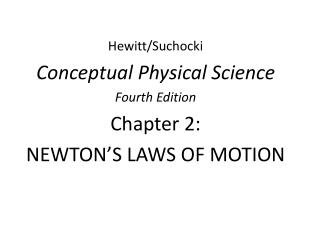 Chapter 2: The Laws of Motion - . what do you think? agree or disagree?. lesson 1: gravity and friction. force. a push or

Chapter 2 The First Law: the concepts - Thermodynamics : the study of the transformations of energy , enables us to

Chapter 4 Force and Motion - . force and motion. a force is a push or a pull exerted on an object. can cause objects to

Hewitt/Lyons/Suchocki/Yeh Conceptual Integrated Science - . chapter 12 the nature of chemical bonds. this lecture will