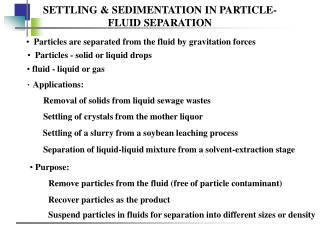 SETTLING & SEDIMENTATION IN PARTICLE-FLUID SEPARATION. Particles are separated from the fluid by gravitation forces. Particles - solid or liquid drops. fluid - liquid or gas. Applications:. Removal of solids from liquid sewage wastes. Settling of crystals from the mother liquor. SEDIMENTATION - . introduction. sedimentation, or clarification, is the process of letting suspended material settle by

Sedimentation - . lesson four: sedimentation as nonpoint source pollution. let’s review what we have observed so far.

Particle Deposition - . settling rate -- the speed at which a particle will settle to the bottom of a body of water

1. Conservation of Mass - . v. dz. dy. dx. a continuous fluid can be thought of as being made up of a large group of