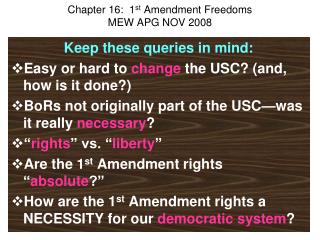 Chapter 16: 1 st Amendment Freedoms MEW APG NOV 2008. Keep these queries in mind: Easy or hard to change the USC? (and, how is it done?) BoRs not originally part of the USC—was it really necessary ? “ rights ” vs. “ liberty ” Are the 1 st Amendment rights “ absolute ?” Unit 5 – Economic Rights - . economics rights of the citizen. decisions about economic security. each country in the

Carers rights: Our responsibilities - . natasha sloman head of social work and social care january 2012. why should

July, 1791 The Civil Constitution of the Clergy - . 1789 the peasant carries the clergy and the nobility. ‘we ‘ope

WebDFS - . budget amendment and personnel processing. webdfs. what is it? web-based system for preparing and routing